The equations need to be corrected before an audio can be made. Otherwise it will not make sense.

Agreed, much of this is incomprehensible.

I agree with the previous two commenters. Might I also suggest breaking this up into smaller chunks of text. I can almost guarantee that ten requests of ~450 words will be fulfilled much more quickly than one request of ~4500 words.

I agree that much of this is currently incomprehensible. Since the journal article information is at least comprehensible, it was not difficult to find the article in more readable format:

Also, you do not have to record the entire article at once. You are free to submit audio as long or as short as you desire. I've seen some people post over 10 audio responses to a single audio request. And each audio response counts towards credits.

Nevermind, it looks like you no longer receive credit for each submission. Only one credit per submission.

*only one credit total for each person that records something in response to a request regardless of the number of audio submitted. 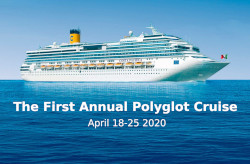 A 7-day all-inclusive luxury holiday in the mediterranean sea

....in the company of fellow language learners, amazing polyglots, podcasters, and many more!