Hello! I'm trying to learn the basics for different languages, and I am looking for some help here at Rhinospike - with good recordings of the simple phrases that I have listed below, and any helpful comments you might have to make these phrases better in your language.

The English phrases that I am working with are (I will do further sets as I learn more):

hello / hi
goodbye / bye bye
thank you / thank you very much / thanks / many thanks
you're welcome
yes, please
no, thanks
my name is Jerome / I am Jerome

Maybe there are better ways to express these phrases in your language?? I am doing English/French/German/Spanish/Russian to begin with, but hope to extend this to other languages as well. I'm interested in learning about everything to do with the different languages, including different dialects, local expressions - real language used by real people.

Many thanks for your help!

If you want to chat about this idea or just want to swap ideas about language learning, I can be contacted on luepkes.jerome@gmail.com or just get in touch here on Rhinospike...

I recorded your script with some acting I imagined from the sentences.
You know, Japanese has male way and female way in the usage.

やあ sounds very mannish, so I said that with lower tone (hopefully it sounds like a man).
And ジェローム is a male name, so I did the same.

バイバイ sounds very casual. Grown-ups use it only with friends. Children use it a lot. So I tried a childlike voice.

いやいや can be used as "You're welcome", but it sounds like that person is very old. I thought いえいえ was more common for that usage.

About the title you use for this script, Polyglot Project - 日本人 01, I'd say 日本語 instead of 日本人 could suit better to your project, for 日本人 means Japanese people, 日本語 Japanese language.

I hope your project will go well!

addition:
いやいや sounds like that person is a man or very old person. 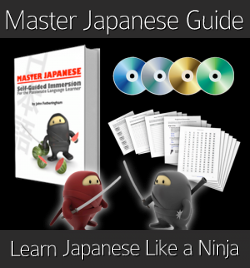 165 pages of step-by-step instructions, motivation strategies, and resources to carry you along the road to Japanese fluency. Now with ninjas!